Djibouti is one of the smallest and least-filmed nations in Africa neighboring Ethiopia and Somalia. The landscape primarily consists of rocky desert, volcanic plateaus and arid mountain ranges. Djibouti is a true delight and one of the best places in the Horn of Africa for filming documentary web series where you can cover series including the history and culture of Djibouti, lakes, explore the ecology and venture out into the untouched coral islands on the Red Sea. 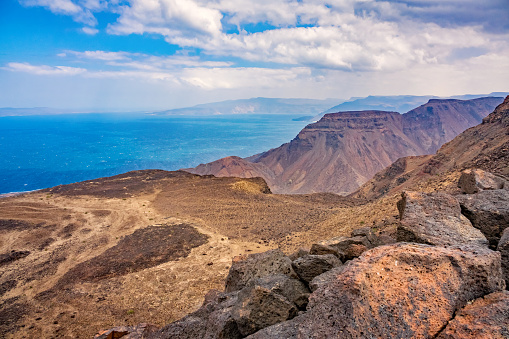 Stock photograph of landscape at Gulf of Tadjoura, Tadjourah Region, Djibouti on a sunny day.

Film locations can be divided into the following regions and you can schedule your shoot according to what you would like to cover in your shoot. Regions include Djibouti Region home to Djibouti City the capital and main entry point to Djibouti by air, Ali Sabieh Region, Arta Region, Dikhil Region, Tadjourah Region, Obock Region

There are other several locations of interest to visiting filmmakers and photographers including Lake Assal a crater lake in the Danakil Desert of central Djibouti. Lake Abbe is a salt lake on the Ethiopia-Djibouti border. Grand Bara is a desert in southern Djibouti. Day Forest National Park is located in the verdant Goda Mountains. Mousa Ali volcano is Djibouti’s highest point. Djibouti offers easy accessibility to the Red Sea great for underwater photography and filming. The Gulf of Tadjoura and Gulf of Aden have beaches and turquoise waters, Maskali Island and Moucha Island. Contact us here on How Film shooting permit is processed for filming in Djibouti.

Requirements and fees to film in Djibouti

You will need to get permission to be allowed to film in Djibouti. Contact us here and we will help you secure a filming permit for filming in Djibouti.

Unauthorized filming, photography or any other recording of government buildings, military installations and key infrastructure such as airports and border controls, bridges, and public buildings, as well as of religious sites such as mosques is illegal while filming in Djibouti. Penalties may include arrest, fines and confiscation of your filming equipment. Please contact us here for more information on filming in Djibouti.

On top of the above you will need to cover accommodation, Visas and work permits, fixer fees and transport for a successful shoot in Djibouti as below;

Film Crew Fixers Ethiopia will help you organize transport for film crews to film in Djibouti depending on their interest, budget and the nature of roads in such selected locations to film. We recommend Customized 4x4WD Land Cruisers. For us to estimate how much it will cost in terms of fuel, we will need to look at your filming schedule to establish mileage and distance to be travelled.

All our vehicles come with drivers who act as location fixers and most of them have been to almost all parts of Djibouti and are thus conversant with the local situations and are able to provide relevant information and fix any situation on ground. These act as intermediaries between you and our office while on location in Djibouti. Contact us here if you are in need of a Film fixer in Djibouti to help you film in Djibouti.

When To Shoot in Djibouti?

Djibouti is very hot and arid between June and August. October to April has slightly cooler conditions with little rain this is the best time to film for weather. The best underwater photography conditions are from September to May.

Fest’Horn festival celebrates music from the Horn of Africa in December. Ramadan is widely observed with many services closed during this period.

Film crew Fixers is a local fixer company in Ethiopia, we assist filming companies and Production agencies in Ethiopia and Djibouti. We handle all fixer services required with our professional team of local fixers and driver guides. We have all relevant connections with other service providers and government agencies in Djibouti to make sure that accreditation and filming permits for filming in Djibouti are processed in the shortest time possible. Contact us for details and all relevant information you would like to know for successful filming in Djibouti.