Port Said is located on the northern part of Suez Canal in the Egyptian city on the Mediterranean Sea. It is one for the main ports of Egypt. Notable filming locations at Port Said include the art deco building offers a glimpse into the past, to when Port Said was a cosmopolitan trading hub and the Islamic-style Suez Canal Authority Building with its green domes.

Contact us here for your planned shoot in Port Said we will give you an expert help ranging from securing all filming permissions, advise and various services required for a successful shoot. 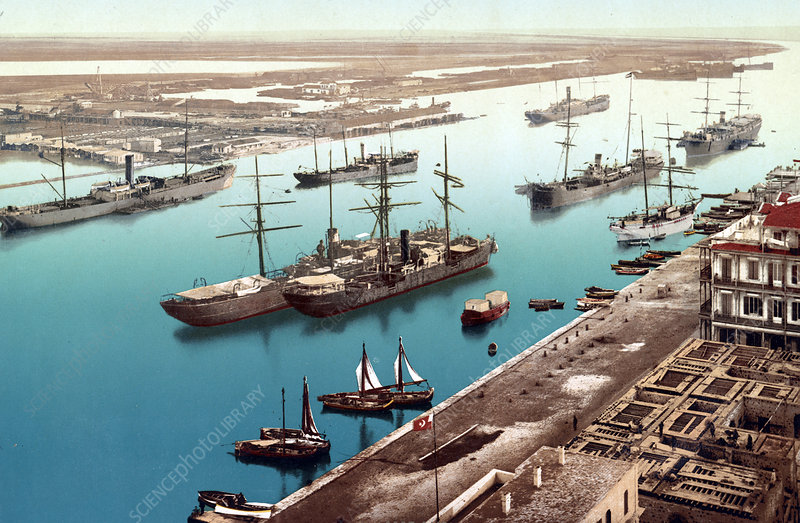 Egypt. Port Said. The port. In 1854 and 1856, Ferdinand de Lesseps obtained a concession from Sa’id Pasha, the Khedive of Egypt and Sudan, to create a company to construct a canal open to ships of all nations. The excavation took some 10 years using forced labour of Egyptian workers during the first years. Some sources estimate that over 30,000 people were working on the canal at any given period, that more than 1.5 million people from various countries were employed, and that thousands of laborers died. The canal opened under French control on 17 November 1869. Although numerous technical, political, and financial problems had been overcome, the final cost was more than double the original estimate. The canal had an immediate and dramatic effect on world trade and it played an important role in increasing European colonization of Africa. Photoglob Company, Detroit Publishing Company, 1905.

Requirements and permissions to film in Port Said

Film Location Permits are required for filming in Port Said however this depends on the location and nature of your shoot. A visiting crew will have to apply for location permits with their local Egyptian Embassy including the name of the local fixer company Film Fixer Ethiopia that will service your shoot in Egypt.

The embassy then sends this on to the Press Office in Cairo. Once the locations have been cleared with all relevant authorities, location permits are granted. A government minder may be required to accompany the production. Permits for shooting b-roll are free but take about 3 weeks to clear. Individual permits are required for each antiquities site. Prices and timing vary depending on several factors including the type of shoot, special dates, extent of location control required, and whether or not there are any current excavations or public access. Most antiquities including the Pyramids of Giza cost $1000 per day from 9am to 4pm for a documentary shoot. A commercial shoot featuring a product costs $3000 per day. Filming outside of these hours is possible at extra cost. Long form projects such as films and TV dramas require extra permitting which can take up to 3 to 4 months to permit. Contact us here to guide you processing the permits.

The often quoted paradox of permitting in Egypt is that nothing is legal, yet everything is possible once you contact us for an expert help. As such, a crafty approach from a well connected fixer and producer is essential to save on costs and carve the best path through the bureaucratic Egyptian permitting process. Please feel free to contact us for permitting questions on specific locations.

On top of the above you will need to cover accommodation, visa and work permits, transport and others for a successful shoot in Port Said as below;

You will need to purchase the tourist visa or a business visa for entry in Egypt. Many film crews prefer obtaining their visas before they come to Egypt however Nationals from most western countries can get a visa on arrival which is valid for stays of up to 30 days. There is no special work permit required to film in Egypt. Proof of yellow fever vaccination and a COVID-19 free certificate may be asked if arriving from affected countries. Visa, work permit and other entry and exit conditions such as customs and quarantine regulations can change regularly. We advise you contact your local Egyptian Embassy or diplomatic mission or us here for the latest travel information to Egypt.

We will help you organize transport for film crews to film in Port Said depending on your interest, budget and the nature of roads in such selected locations to film in the park. We recommend Customized 4×4 Land Cruisers. For us to estimate how much it will cost in terms of fuel, we will need to look at your filming schedule to establish mileage and distance to be travelled. Contact us here

Egypt is not an ATA carnet member country. You will need to have a permit to bring film equipment into Egypt so allow at least a month for processing this permit. Our Egyptian service producer/fixer handles safe import and export of your gear. All the standard camera, grip and lighting equipment is available locally including Motion Control and Techno crane Contact us here if you are interested in hiring filming equipment in Egypt.

Fixers in Egypt to help you film in Port Said

All our vehicles come with drivers who act as location fixers and most of them have been to almost all parts of Egypt and are thus conversant with the local situations and are able to provide relevant information and fix any situation on ground. These work as intermediaries between you and our office while on location in Port Said.

Where to stay during filming in Port Said

Lodge options to stay in during filming in Port Said range from Budget, mid-range to luxury options. You will choose what to stay in depending on your interests and budget. Contact us here for reservation and booking details.

What is the best time to film in Port Said?

Filming in Port Said is done throughout the year and the best time is from February to April and September to November.

Film Crew Fixers is a local fixer company in Ethiopia, we assist filming companies and Production agencies in countries located in the horn of Africa including Egypt. We handle all fixer services required with our professional team of local fixers and driver guides. We have all relevant connections with other service providers and government agencies in Egypt to make sure that accreditation and filming permits for filming in Egypt are processed in the shortest time possible. Contact us for details and all relevant information you would like to know for successful filming in Port Said.