Irecha Festival takes place every year in September. It is a thanksgiving holiday of the Oromo people in Ethiopia who celebrate Irreecha to thank Waaqa (God) for the blessings and mercies they have received throughout the previous year. The Irreecha festival is celebrated every year at the beginning of Birraa (Spring), the new season after the dark and rainy winter season. It is attended by hundreds of thousands of people.

They celebrate thanksgiving at sacred lakes across Oromia and Hora Harsadi, Bishoftu, Oromia as a whole. Once at the lake, festival-goers immerse the green grass and the flowers they are carrying and sprinkle themselves. Contact us here for filming the Irecha Festival in September 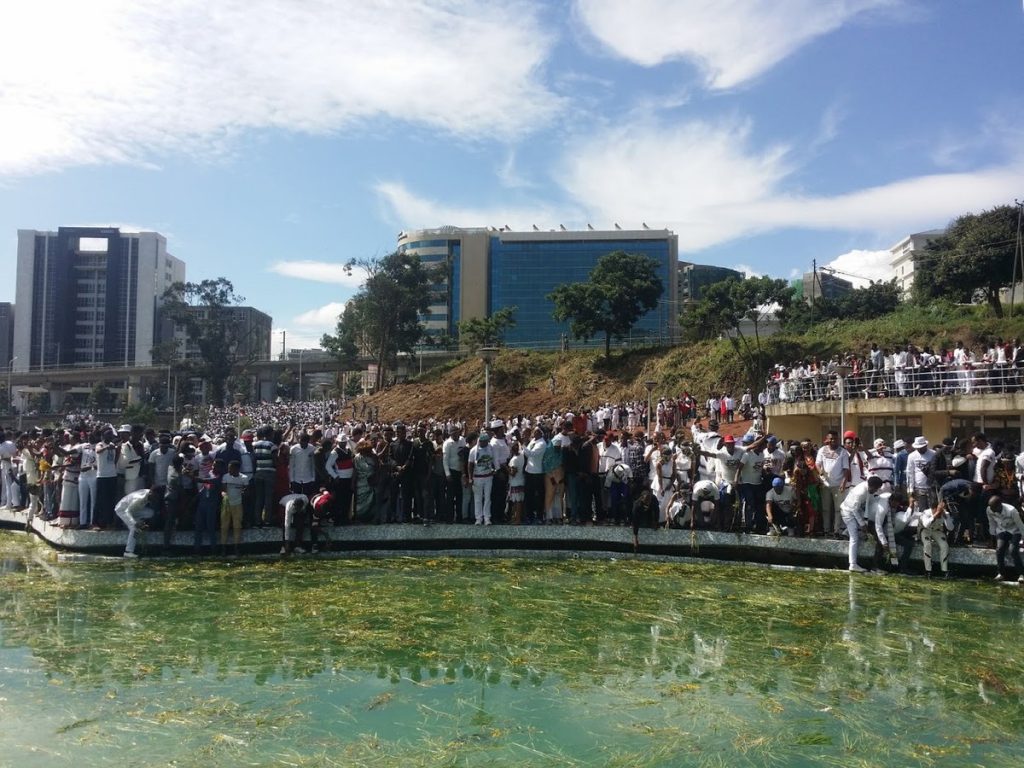 Requirements and permissions to film the Irecha Festival in September

For filming in Ethiopia, there are no specific set fees. They often require donations for assistance from local film fixer to help you all through during your shoot of the Irecha Festival in September. Some regional governments will charge location fees. In many cases, our fixer will need to travel to negotiate location fees in person with the authorities in Gondar City. Aerial filming in Ethiopia requires the pilot have a flight permit from the Ethiopian Civil Aviation Authority. Please contact us for more information on filming in specific locations in Ethiopia.

A foreigner wishing to shoot films in Ethiopia is required by law to apply to the office of Government Communication Affairs Office Foreign Media Accreditation not later than ten (10) days prior to the day on which he/she is due to commence filming, if you don’t want to hustle contact us and we help you all through the process of securing a filming permit in Ethiopia. The application shall contain the purpose and title of the film, the duration of the shooting and the exact location where it takes place, and the total production cost of the film as well as the portion that will be used within Ethiopia.

On top of the above you will need to cover accommodation, visa and work permits, transport, and others for a successful shoot of the Irecha Festival in September as below;

We will help you organize transport for film crews to film the Irecha Festival in September depending on their interest, budget, and the nature of roads in such selected locations to film in the park. We recommend Customized 4×4 Land Cruisers. For us to estimate how much it will cost in terms of fuel, we will need to look at your filming schedule to establish mileage and distance to be traveled. We also organize both charter and scheduled air transport for those that need to fly in order to reduce the number of drive hours to the Park.  Contact us here

Where to stay during filming the Irecha Festival in September

Lodge options to stay in during filming the Irecha Festival in September range from Budget, mid-range to luxury options the option you choose will be determined by the location where you are filming the feast from in Ethiopia. You will choose what to stay in depending on your interests and budget. Contact us here for reservation and booking details.

Film crew Fixers is a local fixer company in Ethiopia, we assist filming companies and Production agencies in Ethiopia. We handle all fixer services required with our professional team of local fixers and driver guides. We have all relevant connections with other service providers and government agencies in Ethiopia to make sure that accreditation and filming permits for filming in Ethiopia are processed in the shortest time possible. Contact us for details and all relevant information you would like to know for successful filming of the Irecha Festival in September.